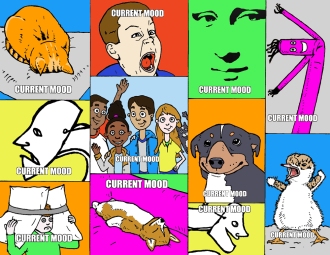 Hi friends, 2018 is off to an exciting start with 2 new short plays in production.

First up, “This Land Is MY Land” premieres at the 52nd St. Street Project as part of Current Mood: The Relatable Plays. This is one of the Project’s 2-on-2 shows where 2 kids act in a play written for them by an adult and directed by an adult. My play features two of my favorite kids at the Project, one of whom is Emmanuel, my Smart Partner. It’s a political satire set in 2049 at a moment when the country’s public lands are about to be privatized and two regular joes are fighting to make sure they get their constitutionally-guaranteed acre—but maybe they can overcome their differences by overthrowing the corrupt government instead?

And then—a grand start to life here in Minneapolis—my first collaboration with a local company here. The first play of Pillsbury House + Theater’s 2018 season is The Great Divide II: Plays on the Politics of Truth. The show consists of 5 plays by 5 playwrights local to Minneapolis and they’re 5 of my favorite people that I’ve met since moving here: Christina Ham, Jessica Huang, Stacey Rose, and Andrew Rosendorf. The show will be directed by Noël Raymond and features a cast of the Twin Cities’ best: Tracey Maloney, Audrey Park,  Mikell Sapp, & Ricardo Vazquez.

This site uses Akismet to reduce spam. Learn how your comment data is processed.